Florida is one of a number of states that not only doesn’t recognize same sex marriage, it has a constitutional amendment banning it.  But on June 28th the USCIS put the pedal to the medal in granting green cards to same sex couples – and that first couple lives here in sunny Florida, of all places.  It is now clear that gay persons from any state can obtain a green card if he or she was married in a jurisdiction that has legalized it. 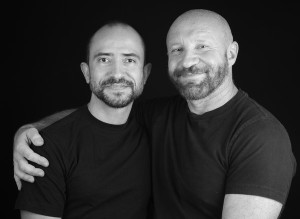 Traian Popov, left, with Julian Marsh, has been approved for a permanent resident visa.

After the Defense of Marriage Act (DOMA) was crushed last week by the Supreme Court, gays across the nation celebrated.  And the the net result is a 180 degree turnaround on immigration policy, which now will grant permanent residence (green card) and eventual citizenship to gay persons who marry U.S. citizens.  Of course they’ll still have to get married in a jurisdiction that allows it, and currently 13 states and the District of Columbia do.  But they can reside in any state, because immigration law is federal law.

This is great news for gay couples and immigration lawyers.  But what about social security benefits for surviving spouses?  No one knows for sure yet, but until something comes out of the white house or congress, SS benefits may only be initially paid in states which recognize same sex marriage.  Some SS experts are saying that once benefits begin, a gay couple could move to a state that doesn’t recognize same sex marriage and continue to receive benefits.

Likewise, joint tax returns may not be available to gay couples in states like Florida that ban gay marriage.   It’s too early to tell just yet, but these issues may shake out fast in the coming weeks, just like the immigration decision on gay couples.

So how long will it take the remaining 37 states to come around?  I think it’s going to be a while, especially here in the south.  It may take another decision by the Supreme Court to get it done.  But most, including this writer, think it’s only a matter of time.  And it’s the right thing to do anyway.  Stay tuned, it’s going to be interesting.

The following is an article from the NY Times on the first gay couple to receive a permanent residency card (green card) in the U.S.

An American man in Florida and his husband, who is from Bulgaria, have become the first same-sex married couple to be approved for a permanent resident visa, an immigration milestone that comes after the Supreme Court struck down a federal law against same-sex marriage.

The notice of approval of a permanent visa, known as a green card, was issued by e-mail late Friday to Traian Popov, a Bulgarian immigrant who lives with his American spouse, Julian Marsh, in Fort Lauderdale, Fla. The approval was evidence that the Obama administration was acting swiftly to change its visa policies in the wake of the court’s decision on Wednesday invalidating the Defense of Marriage Act, or DOMA.

The approval came so fast that it took the couple’s immigration lawyer, Lavi Soloway, by surprise. Mr. Soloway, who represents many same-sex couples, said he received the official message while he was attending the annual conference in San Francisco of the American Immigration Lawyers Association.

“I thought, ‘Am I reading this wrong?’ ” Mr. Soloway said in an interview on Saturday. Although it was a professional setting, he said, he began to weep with emotion when he realized the significance of the notice.

The Supreme Court’s decision has had a significant impact in cases involving United States citizens who are seeking green cards for foreign spouses of the same sex. DOMA, which defined marriage as a union between a man and a woman, had prohibited the federal government from recognizing same-sex marriages as the grounds for any visa.

Speaking by telephone on Sunday from the couple’s home, Mr. Marsh said that he turned 55 on Friday and that he and Mr. Popov were celebrating with dinner at a Red Lobster restaurant when they received news of the unprecedented green card.

“It was just kind of a shock, like winning the lottery,” said Mr. Marsh, a music producer. “The amazing overwhelming fact is that the government said yes, and my husband and I can live in the country we chose and we love and want to stay in.”

Mr. Popov, 41, said he had been living legally in the United States for 15 years with a series of student visas. He has completed three master’s degrees, he said, and is working on a doctorate in social science at Nova Southeastern University in Florida. The couple married in New York last year, and they applied for a green card in February.

Immigration officials said the visa agency, United States Immigration and Citizenship Services, would announce new procedures early this week for same-sex binational couples seeking green cards. The first approval was also supposed to be issued this week, officials acknowledged, but eager officers at the agency pressed the button on the notice on Friday.

For the last two years, the agency has kept a list of same-sex couples whose green card petitions were denied, the officials said, anticipating that the Supreme Court would eventually weigh in on DOMA. Those denials will now be reversed without couples having to present new applications, if no other issues have arisen. Gay couples with no denials, like Mr. Marsh and Mr. Popov, will move through the system at the same pace as traditional spouses, officials said.

Mr. Popov said he would work to quickly finish his doctorate since he will now be able to seek a job legally. He and Mr. Marsh said they also planned to become same-sex marriage activists in Florida, a state that does not recognize such unions. “We are first-class citizens in New York and in the eyes of the federal government, but second-class citizens in Florida,” Mr. Marsh said. “We won’t stand for that.”